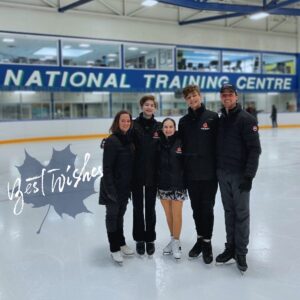 Skate Canada National Championship, Novice Division is taking place this weekend in Calgary. Congratulations to these young skaters and coaches on qualifying!
.
Gavin will be competing in the Novice Mens category coached by Janice Morgan. Gavin began his Figure Skating journey with Mariposa and has recently landed his Triple Lutz!
.
Dana & Nicholas will be competing in the Novice Ice Dance category coached by the Mitch Islam. Nicholas has been skating with Mariposa and the Barrie Skating Club since Canskate. Dana, originally from Toronto CS&CC, is an ambassador for Carley’s Angels and is often found cheering on fellow teammates.
.
There have been an entire team of coaches working with these young, promising athletes to help them realize their dreams of competing at a National Championship. We are extremely proud of their dedication and hard work this past season.

Have a question? We're here to help!

I have been bringing skaters to the Mariposa Seminar for 18 years. Every year is a fabulous experience for both my skaters as well as myself. It never ceases to amaze me how professional everyone is and how willing this team of coaches is to share information to both the skaters as well as the coaches at the seminar.